Refrigerants are working fluids present in the air conditioner or refrigerator you may have at home. They undergo several phases in a day, such as going from liquid to gas and vice versa.

The industry for refrigerants is heavily regulated because they are one of the primary contributors to unexpected climate changes, depletion of the ozone layer, and they have a toxic and flammable nature. Read more about other types of refrigerants on this site. 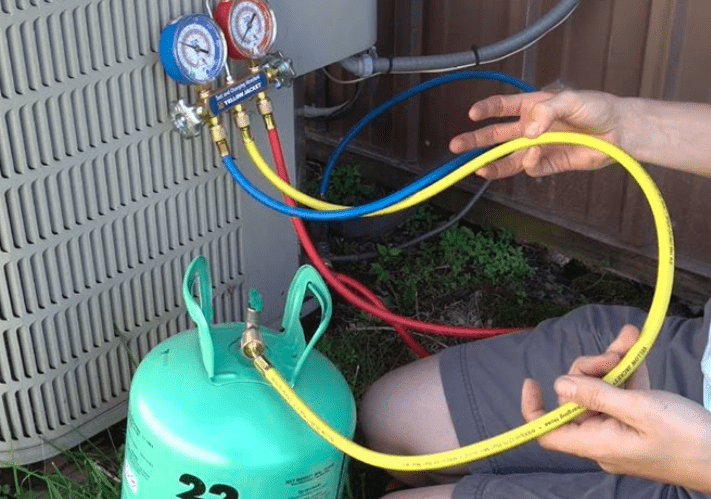 The first ACs invented were the ones that have used several flammable gases like propane, methyl chloride, sulfur dioxide, and ammonia. When there are leaks present in an HVAC system, the result can be fatal, and sudden explosions may be fatal.

When Thomas Midgley Jr created freon in 1928, everybody thought that this was the answer. This is a non-toxic gas, unlike the former refrigerants. They are non-toxic and natural and are called R-12 chlorofluorocarbons.

The trademark is currently owned by the Dupont company, now known as Chemours. They are the ones who also put the rights to use hydrofluorocarbon (HFC), chlorofluorocarbon (CFC), and more.

Phasing Out of the CFC

Studies involving chlorofluorocarbon or CFC found out that this substance is causing major damage to the earth’s ozone layer. This ozone layer is a protection of the earth from the sun as well as its ultraviolet radiation.

The result of the holes in the ozone was the melting of the ice caps in both the north and south poles and the immense heat that everyone felt.

There were newer protocols put in place to phase out the HCFC and CFC. However, this did not specifically address the contributions made by HFCs in terms of changes in the climate.

There were adoptions like the use of HCFC, specifically the R-123 and R-22, and they were accelerated when most chiller facilities and households in the United States are using them.

Listings of the Refrigerants and their Number of Rings are the following.

Learn more about hydrocarbon in this link: https://www.investopedia.com/terms/h/hydrocarbon.asp. They are very adaptable and can be used in various applications.

Aside from their versatility, hydrocarbons are popular for their environmental-friendliness. Know that the classifications like HFCs, HCFCs, and CFCs have adverse effects on the environment.

The HCFC and CFC contain chlorine that continues to damage the ozone layer. When released into the atmosphere, their effects include melting icebergs in the Arctic and the Antarctic poles. The high ozone potential is one of the reasons why they are phased out today.

HFCs may not harm the ozone layer, but they have other environmental effects like global warming. Their potential in this is high, and they are known as super pollutants. Hydrofluorocarbons are usually used worldwide, but they are considered for the complete phasing out as well.

Advantages of Hydrocarbons as a Refrigerant

Since the HFC, CFC, and HCFC will be phased out, there’s bound to be an alternative, which can be in the form of hydrocarbons. The hydrocarbon refrigerant is more efficient when it comes to cooling because they have higher latency in heat evaporation.

Another plus side is that they are better because of their low potential to cause global warming, and they are generally eco-friendly. Other advantages that they provide are the following:

This overall value pertains to the amount of heat or electricity required to turn a liquid form into its gas state. As larger amounts of heat are required to break the hydrocarbon molecules’ binding force, a refrigerant will effectively do the freezing than using a traditional fridge.

Using a highly efficient refrigerant means that there’s a significant reduction in energy consumption. This translates to monthly savings as the running costs are lower. Most of the laboratories today operate almost 24 hours a day, and they can reduce their running expenses by going with energy-efficient appliances.

Select builds and designs that can give you the maximum cost efficiency and advanced preservation systems. They are available from many manufacturers and online shops around the world.

If you’re an owner of a laboratory, you only have to tell them what you need. The builds and design employ advanced preservations while reliability is not compromised. They will give you the best performance when you are in the field of researching and obtaining clinical specimens.