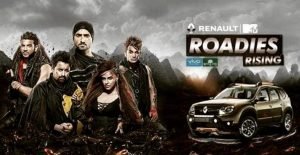 This time Two new Judges Joined and made the show excitement Double. Fans Excited to Watch Harbhajan singh, he as Judge who replaced sushil kumar.

Rannvijay Singh is an Indian television host, film actor and presenter. Best known for hosting the adventure reality TV show, MTV Roadies. He is based in Mumbai, India.

Karan Kundra is an Indian television actor best known for playing the role of Arjun Punj in Ekta Kapoor’s Indian soap opera Kitani Mohabbat Hai that aired on NDTV Imagine. He is also remembered for hosting three seasons of Ekta Kapoor’s yet another crime show Gumrah End Of Innocence on Channel V.

Neha Dhupia is an Indian actress and beautyqueen who has worked in several Bollywood films. She is a winner of the Femina Miss India title (2002).

indian cricketer is set to bowled in Roadies Rising and he became fifth judge of roadies rising. fan of roadies is eagrly waiting to seen him in a reality show like roadies.

Bigg Boss 9 winner, Roadies X2 winner and splitsvilla 8 winner is known as king of reality show. It’s great to see him judging the show where he himself enters.